skip to main | skip to sidebar

Selling Baked Goods from the Grace Church Yard, and the Birth of the Bread Line


The cornerstone for Grace Church, the iconic landmark at Broadway and 10th Street, was laid on Oct 30, 1843. The land was purchased earlier that year from the estate of Henry Brevoort Sr. for $35,000. The church was designed by James Renwick (age 23 at the time, who later designed St. Patrick's Cathedral) and was consecrated in 1846. 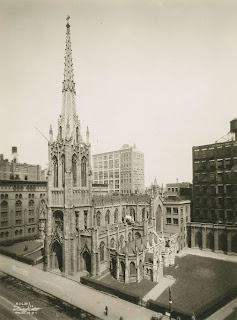 Grace Church, c.1924, looking northeast with Broadway running uptown to the left and 10th Street to the right. Note the yard in the lower right of photo.
NYPL Digital Gallery


But Grace Church's land did not originally stretch to 10th Street as it does today. The lot on the northeast corner of Broadway at 10th Street, just over 39 feet wide, was the site of another well-known building of its day. 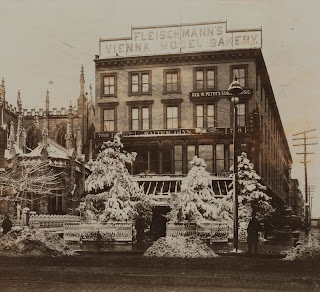 A view looking east across Broadway (uptown to the left) at Fleischmann's Vienna Model Bakery c. 1888. Note Grace Church to the left, and the snow of the Great Blizard of '88.
NYPL Digital Gallery


Louis Fleischmann and his brothers, Charles and Max, were Austrian immigrants who introduced "Vienna bread" at their "Vienna Model Bakery" at the 1876 Centennial Exhibition in Philadelphia. The bread and model bakery were a huge hit, and shortly afterwards Fleischmann opened a permanent bakery at 788 Broadway, on the corner of 10th Street.

The bakery and its attached cafe became a popular meeting place and destination for Ladies Mile shoppers (the bakery was located across 10th Street from the "Iron Palace" of A.T. Stewart and later Wanamaker's).  Vienna bread quickly spread around the city, becoming one of the city's earliest food fads.

Fleischmann and his bakeries expanded to other cities, while the yeast company bearing his brothers' name continues to this day.
But Fleischmann is also remembered for a form of charity with which he alone seems credited, the "bread line". As Fleischmann lay on his death bed in 1904 it was noted:


The idea of [the bread line's] establishment came to Mr. Fleischmann when he noticed a crowd of hungry tramps standing over the grating at the bakery at Tenth Street and Broadway, scenting the hot loaves that were being turned out in the basement. Mr. Fleishmann offered to feed one of the men, and soon a line formed.
New York Times (September 25 1904)

Illustration from an article about Fleischmann and the origin of his philanthropy, New York Times (October 2, 1904)﻿

From then on, each night at midnight, a line would form around the block in front of Grace Church to which Mr. Fleischmann would distribute his unsold goods.  It was said that Mr. Fleishmann himself was often seen handing out loaves, along with hot coffee in the winter.

Shortly after Fleischmann's death in 1904, Grace Church acquired the property. 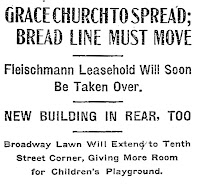 After the bakery moved its operations to a new location at 11th Street between Broadway and University Place, the bread line continued for years. 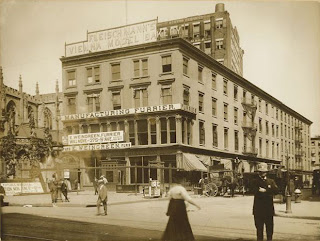 A view of the Fleishmann's building c. 1908, shortly before it was demolished. Note the E.Weingarten's sign noting their imminent move to another location.  I always chuckle at the cross-armed police officer sternly watching the photographer, lower right.
NYPL Digital Gallery

An Interesting Artifact: The Bend in Broadway

As legend has it, Henry Brevoort Sr., a prominent landowner of the early 1800's, fought the proposed path of Broadway laid out in the 1807 draft of the Commissioner's Plan because it cut directly though his land on a straight line to 23rd Street. It is said that Mr. Brevoort owned a favorite tulip tree under which he enjoyed relaxing and having a smoke. This tree, near the present intersection of Broadway and 10th Street, would need to be cut down to accommodate the new road. To save the tree, Broadway was angled in the direction we know today.


As documented in his fascinating graduate thesis, Reuben Skye Rose-Redwood details the incident that inspired the myth. In 1807, Mr. Brevoort and six other landowners petitioned the commissioners in a letter titled "Reasons of several land holders in Broad Way against the payment of the Sums assessed upon them for Opening the Same.” In fact, the landowners objections had more to do with monetary concerns rather than a tulip tree. The city gave in, the commission made its recommendations, and in 1815 the "bend" became law.

The image above is a detail from the famous Randel Farm Map c. 1819 superimposing the street grid with existing farm boundaries and showing the point where the Bloomingdale Road (the northern route of today's Broadway) meets lower Broadway at 10th Street, bisecting Henry Brevoort's property.

Reference: RATIONALIZING THE LANDSCAPE: SUPERIMPOSING THE GRID UPON THE ISLAND OF MANHATTAN, a thesis in geography by Reuben Skye Rose-Redwood.

Very informative blog. Did you know that church is haunted? I was told that by someone who was too scared to enter. I wanted to laugh but she grew very frightened. We walked by.

@Mick
Thanks for the comment! And now I'll probably get that creepy tingling feeling when I walk by...

That 1888 photo of the bakery is amazing. I had no idea of the history of that corner - thanks for sharing.

@Goggla
Hey thanks! I usually just stumble over new things and figure if I think it's interesting then someone else probably will!

Peeking at physical changes in the East Village (with some occasional history), I apply all my geek powers and talent for time-wasting to researching the history of locations and buildings and other places in my neighborhood that I find interesting.

I hope to add new posts about once a week, and I welcome ideas for topics!

Blogs You Should Read